write a paragraph describing your utopia

A while back I updated my facebook status asking “What is your utopia? Please share.” I wanted to see what kinds of responses I would get because I likely would not answer such a question in a public forum, unless I was in a very specific mood. But I wanted to see if anybody would actually respond with descriptions of what they imagine to be the good society. 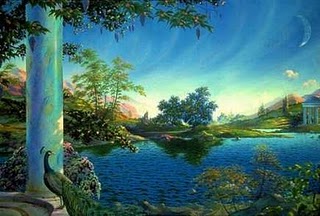 One older friend who can be counted on to respond to such queries staked out the loving–and supportive–family and rewarding job. One old friend from a long time ago (when I was trying to live my own utopian reality) described a fantastical place with tribes and technology and trees and love and telepathy, and no marginalisation of “simple” folk (Pandora). One current friend followed that up with the desire for a self-stocking refrigerator, a cute boy servant, and a modest super power. And one friend put out there the wish for connection with self and world, and called it “mushy, I know.”

At first I was a little disappointed by how few responses my question received. But now it seems like a pretty good representational selection of the utopian thinking that’s out there. One has participated, protested, organised, experienced, and now settles and enjoys the grandchildren produced by this life. One still lives slightly out of this world and might be so persistently wishful and sensitive that utopia sparkles at her once in a while. One finds it with her tongue in her cheek, and one takes it as a personal possibility.

So I came across this online paragraph-writing assignment for young students:

These utopias are rather more unleashed.

They all have rules, initiating from what appears to be the first rule, to have fun, but evolving into the requirements to be smart, know the rules, be able to see in color, not call anyone, not go into anyone else’s bathroom, and not wheedle anyone no matter what.

They almost all have copious swimming pools, ocean views, and either hotels or mansions. At least three of them have houses with an unbelievable number of bathrooms (25? 30?!) and the bathrooms tend to have flat screen televisions, pool tables, and ice skating rinks. In one utopia money grows on trees and there are malls on every corner. In one there are 90 men and 100 women. In one dolphins and tuna do flips and wave at you. In one of them you will be shot by robots or a zombie if you break the rule of no guns. One is “an island nobody knows about” that is located both “in the middle of nowhere” and “in the Indian ocean.” One has “children that are made of sand, water and love.”

Some of this is unsurprising, most is spectacular, some is mystifying. But what is most revealing about these paragraphs is the forum (blogspot). (Based on Ruth Levitas’ categories of content, form, and function, would “forum” fall in the category of form or function?) Like facebook, it is public. And here the kids respond to each other:

“You don’t need to improve on anything!! It’s way better than mine!!”

This does tend to be a problem with utopia in general.

The discourse happening in this forum seems to be unmediated, and the kids almost immediately arrive at all the core issues. In response to the spectacular, magical, or outrageously consumerist, they make comments like, cool, I would like to visit that utopia. But they seem more inclined overall to point out what they think is missing from each other’s utopian societies: needs more jobs, needs more school, needs more housing, men shouldn’t have five hot girlfriends because that’s not an appropriate rule.

The assignment asks them to write the paragraph descriptively enough to create a “mind movie,” and the comments address how effectively the kids think their peers did this. They want to be able to visualise the others’ utopias, and they don’t seem shy to tell each other what they thing is wrong.

I wonder how many hurt feelings there were, or if there were any. I wonder how much the teacher removed from the thread. I wonder why the thread’s comments are still open. I wonder if the implications of what these kids are discussing and how they are carrying on their discussion is noted by anyone, or if the assignment is mostly just for the sake of practicing their writing skills.

In any case, it is a beautiful example of the utopian impulse, and more like what I was hoping for in response to my status update.

This entry was posted in nomenclature and tagged canker, ideology, utopian impulse. Bookmark the permalink.

2 Responses to write a paragraph describing your utopia