All day I had this song in my head from a ska/punk/roots band I used to love to dance to, for hours and hours, for a few years, until they were gone, along with the rest of the awesome b-circuit bands of the period. Though I submit that Roots Roundup was the awesomest. I miss you guys!

I lost this tape (just dated myself, I’m aware) among a box of tapes left at a friend’s place so long ago. He tried to return that box to me over and over, but I can’t remember what ended up happening to it.

Nostalgia is hitting me hard today, as it has frequently this summer, with this song in my head. This recording doesn’t do the song justice. (But vive l’Internet! So glad it’s there.) Live, it was much more up-tempo, loud, and punk. But the recording is worth a listen, because you might have been at one of those shows, and if you were, you will remember how much fun it was.

Don’t crowd me with your motor car.

Dancing to a song about riding your bike! Remember! Just dancing at live shows. Bands whose members enjoyed each other on stage, who understood transitions and kept the music going, who knew time signatures and sang on pitch, who were sexy even when they took their teeth out to play. Who played SETS. Sets! All the band and all the dance floor in unison pogo. Bouncing on the Commodore Ballroom’s bouncy horsehair-padded floors. Irony-free horn sections. Green rooms crowded with stand up basses, kit cases, Shure 58s, and free beer.

Nostalgia. Memory. Unglued. Unbound. So I got a new bike! 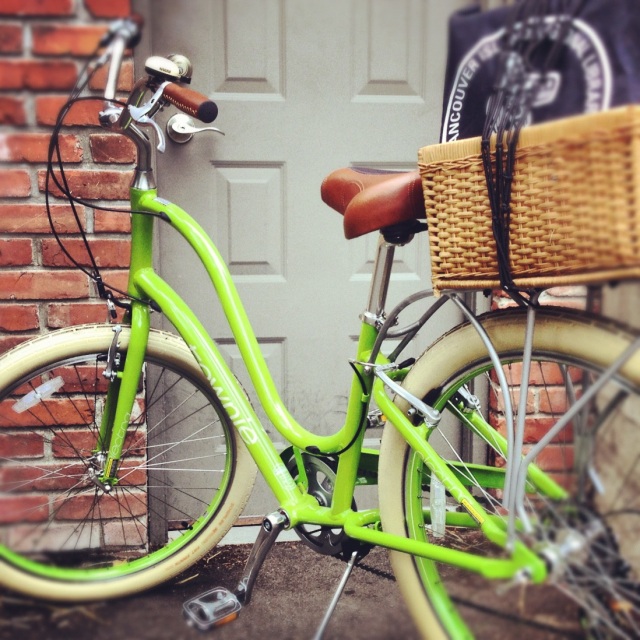 4 Responses to Owl and Pussycat